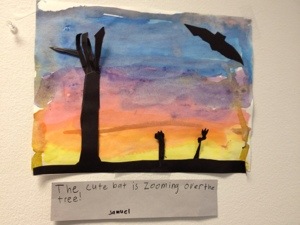 I keep this art piece above the computer in my office at work, so I catch sight of it regularly throughout the day. My heart tends to race a bit every time I glance at it, and I’m not sure why. I love this picture. My oldest son created it, and it is a grand masterpiece in my eyes. I love it because it tells a story beyond the simple phrase attached. The cute bat is not just flying, not just gliding – he is not out for a mundane, evening bat stroll – he is zooming. To me, this is a picture story that carries all the elements. Perhaps that’s why I get a little anxious when I view it. My son made it. My son, the storyteller.
I will endeavor to fill in the lines that he saw fit, in his less cluttered, 7-year-old mind, to leave unsaid.

The Cute Bat
by Samuel and Lucas Draeger

These were quiet days in the woods outside the lighted city.
The woods were dense with old growth trees, coated in silky layers of moss down to their powerful, earth gripping roots. The moss granted a vibrant, emerald color to what would otherwise have been a cold, bleak world.

Few visitors ever made their way into the mossy woods; indeed, it would be accurate to say that the woods had not seen a human face in several years. Those in the lighted city had become distracted; they’d forgotten the woods even stood, despite their unyielding presence beyond the office buildings and outside the windows of their cars as they mindlessly scurried down the adjacent highway. The woods were forgotten, and the creatures within were quite fine with that fact. All were fine to be forgotten, but one. He was a bat – a young one; Reggie was his name.

Reggie was a small bat, small even for his young age, and he was quite cute, as bats go. And while small and cute may be a formula for unconditional adoration in the people world, in the creature world – the world of daily competition over the basics of survival – a bat is better off if he is big, hairy, and scary. Reggie had never known anybody besides his creature neighbors, which meant he never knew what it was like to have his cuteness enjoyed by anybody; rather; his days were spent enduring frequent teasing by the other woodsy creatures.

One evening, when it was light enough for a person to see, but dark enough for a bat to be awake – twilight, they call that time – Reggie was gliding through the woods, landing on tree branches, enjoying the feel of the evening breeze on his leathery bat wings and the coolness of night as it ruffled through his fuzzy bat fur. He loved twilight more than any other time, because it was during this time that the sound of people in the city – the sound of the scurrying cars on the nearby freeway – was the loudest, and since bats use their ears more than their eyes, Reggie found the city noise stimulating. As he flew among the trees, he imagined what it might be like if those trees were shaped like tall rectangles – “buildings” was the word other creatures used to describe those strange looking trees in the city. Reggie wondered what sorts of creatures lived in those tree buildings. He wondered if they were small and cute, like him.
At least, he thought maybe they would like a creature who is small and cute, like me.

Now, there existed a tree at the edge of the mossy woods that was far higher and far mossier than all the other trees of the forest. Beyond that tree, the woods came to an end, turning then to a swampy wetland, then to the freeway with the scurrying cars, then the lighted city with its tree buildings. None of the woodsy creatures had traveled beyond that giant tree in many years, for the city was considered a strange and dangerous place.

As the cute bat soared toward the forest edge, he flew very close to this tree, and he began to wonder what would happen if he were to fly beyond it – if he were to enter the world of the lighted city.

“You would never be brave enough to fly past that tree!” came a teasing voice from the forest floor. Peering down, Reggie spied Sal the fox, gazing up with a sly grin on his whiskery face. Of all the woodsy creatures who loved to tease Reggie, Sal teased the most.

Reggie came to rest on a low tree branch, near where Sal stood. “Maybe I will fly past that tree…someday.” He replied in his small squeeky voice.

“Are you kidding me?” cried Sal. “Those people in the city would eat you for breakfast! A cute little bat like you wouldn’t last a minute in that jungle!”

“He’s right, you know.” came another voice from within the same tree Reggie was perched upon. Reggie looked over to see Oscar the squirrel, who had climbed over to join the conversation. Oscar often teased Reggie as well, but he mostly did it only when Sal the fox was around. “I was talking with Stanley the raven last week…”

“You mean that old crow with the missing eye?!” Sal interrupted.

“Yes! The one eyed crow! He’s the one!” Oscar replied.

“Oh, I heard he’s one of the last creatures to have went to the city!” cried the fox.

“I know! That’s what I’m trying to tell you about! How do you think he lost that eye?” chattered Oscar with his fast, squirrely voice. When Oscar spoke, he always sounded like he had a stash of nuts in his cheeks.

“You mean, Stanley the Raven lost his eye when he visited the city?!” Reggie gasped. “How??”

“Isn’t it obvious, you dumb bat?” Sal hissed. “It was the people! They must have attacked him! They hurt old Stanley, and he’s WAY tougher than you could ever be! You’re so cute and small; they’d turn you into bat stew!”

Reggie’s tiny heart beat very quickly when he heard Sal’s words, and he leapt from the tree branch, fluttering away as the twilight faded further into darkness.