This story is dedicated to Kristen and Decker, whom I met the other day in a store parking lot.
Kristen, I didn’t have anything to give you that day, but our meeting did conceive this little story, which I now send out as a prayer for you. 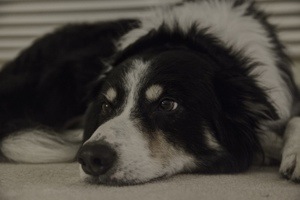 They used to call me Decker the Dude. Decker was fine, that is my name, but “the Dude” part they added, and it would have been ok, but they usually called me Dude just before teasing me in some nasty way. Not harsh teasing, not hitting me or anything – Lady Friend would get angry at that – but teasing like trying to trick me into tasting something savory, then snatching it from my teeth after giving me a tiny lick. Or pissing in my water…they thought they were so clever, those barbarians. I did have a good bed there, a cozy warm corner in the big house with all the guys, but I never liked the way they treated me. Or her – my Lady Friend. She cried often when we were there. Not fearful cries, more like whimpers. She cried like she felt awful bad about something. Cried like she’d given up.

One day, she woke me during the many dark hours, the hours of quiet, she used whispery words with me, which she didn’t need to do, because I knew. We all tend to know these things, we do. It’s something in our noses, and I could smell it on her – the nerves. We were sneaking. We were getting out. Turned out she hadn’t given up, not completely.

It’s most always been the two of us; it always comes out that way, so now it is again. Lady Friend and old Decker. I lost my cozy warm corner in the big house with the teasing guys to the back seat of this rolling box, which is fine by me, except the stiffness in my joints from lying in the back seat all the time. I’m not so limber as I used to be. But Lady Friend gets that about me, treats me well, and I think I treat her well, too. I try to do my part for the team – the Decker and Lady Friend team.

When we go out walking, she usually walks us to the big places with many people moving in and out; people zoos I suppose they must be, and Lady Friend will sit for some time outside the people zoo. I sit with her, keeping watch on the people. Most of them don’t see us. Actually, my nose tells me they only pretend not to see us. They almost always know we’re there, but they have the scent of a creature out of its proper place. They smell a lot like Lady Friend’s mother used to smell.

Some of the people – very few of them, actually – stop to pet me. That’s me, doing my part for the team by letting them pet me. Most often, if a person stops to pet me, he also gives us something to eat. Or he gives Lady Friend some jangly things that she turns into something to eat. So I do my part to look happy for the people. I’m better at it then she is – the happy part. Shake of the tail, little panting, and people know I’m happy. Lady Friend…she does her best, but you need not have a strong nose to know she’s not so happy. She’s worn out. Sometimes I worry I could outlive her.

Not so many days ago, Lady Friend and I were sleeping outside a people zoo. It was not a good day. One of the guys – the mean ones who used to call me “dude” – one of them found us when we were sleeping in the rolling box. Lady Friend decided it was time to leave, but the guy got inside the box and wouldn’t get out. He and Lady Friend became loud, and she started to cry, which I hate, and the guy must have hated it too, because he started to get mad – so mad he grabbed her by the shoulders and shook her back and forth and side to side, and her head was snapping back against the glass window, and my ears could hear the sound of her teeth cracking against each other when her chin smacked against her chest.

My world turned HOT!, I growled at the guy, barked my scariest bark, which startled him, but it also startled me, because my barks are awfully sharp when stifled up inside a little rolling box. I was so startled that I didn’t see his hand when he threw it at me and popped me in my nose. I did mention that we creatures have special noses? It hurts terribly when a brute like him hurls a fist and hits dead on. I yelped, and my old eyes started watering. That got Lady Friend angry, when he hit me like that. She freaked out. FREAKED OUT, started thrashing at the guy with her fingernails, and at some point he must have tried to reach through all those flailing limbs, because he got his hand close enough for her to chomp down with her people teeth. People teeth aren’t so tough as my teeth, but if a person is angry enough, they can still cause a lot of damage, and this guy got damaged. There was much blood.

A high squeel of pain, and the guy opened the door with his non-bitten hand and started backing away. He hollered something like, “CRAZY BITCH!” then walked off fast. Lady Friend reached to the back seat, pat my head with a shaky, shaky palm. She was crying softly. There was a disturbing scent in her tears. She smelled tired. Given up again. I nuzzled up close to her moist, puffy face. More tears came. And more and more, and she clung tightly to the fur of my neck. I let her hold me and cry until she ran out of water for her tears. Then she turned the rolling box on while I climbed into the front beside her. I wanted to keep an eye on her, my dear Lady Friend. I told myself I would never be caught unaware again by that guy, or any other of those guys.

I’m going to tell you something that most two-legged types are unaware of. Creatures like me, we are given a gift. We have in us a bit of magic. It has always been known among us – from our greater days when the guarding of herds and hunting of varmints and the defense of farm homes was part of our daily existence – till now, when our place in the world has become mundane, that we are capable of a single act of wonder. Some of us use our wonder to tell a person he’s sick before the he even knows it. Most of us will use our wonder to predict when it is our own time to die, and we simply want to be left to wander off and die on our own. Me? I know what I’m using my wonder for.

I’ve never been a fighter type, and I still don’t care to be. But if my nose picks up his scent again, anywhere close to me or Lady Friend, I’ll rip his face off. If it ever does happen, I don’t know what it will do to me. I don’t know if I’ll be able to go back to being just Decker, the panting, happy fella outside the people zoo. I may become something else. But I’ll do it. I’ll do it for my Lady Friend. That guy won’t see me coming. None of them will.

They called me Decker the Dude.