I Am The Omega Man

Our Age is one of disheartening, nonstop motion. It becomes more challenging each day for one to find Space and stillness. There’s little point in complaining about this fact; we’ve each ourselves to blame. Have you tried recently to drive your car, for even a small distance, without the accompaniment of the stereo? It’s unnerving! Have you tried for even a day to resist the magnetic pull of your smartphone screen? Try it, and if you’re like most of us, you’ll be jonesing something terrible for a little TwitterFaceTube before the first hour expires. We’re our own worst enemies when it comes to slowing down – making decisions that fulfill, rather than drain us. We all need times of solace, now more than ever. I’ll admit, that as much as I’ve longed in recent days for a break from my daily buzzsaw of activity and overstimulation, I’ve failed to find such, due to my own stubborn attachment to motion – to getting done that which seems in the moment to transcend all other priorities. Thankfully, in the midst of another of my frantic weeks, I found an experience that renewed me for a time. 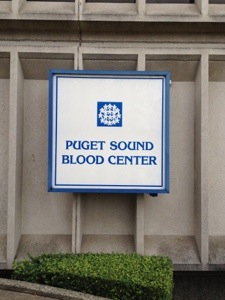 For nearly four years, I’ve worked five minutes from the Puget Sound Blood Center, but in all that time, I’ve never taken an hour of my day to go in and donate. I thought about it, especially when I would drive past the place and glance at its beckoning sign. I thought about it a lot. When I was younger, I used to donate blood regularly. Now that I’m older, I’ve learned that we modern American folks don’t have time to waste on such “trivial” activities. I’ve learned that remaining diligent in one’s work and getting stuff done – these are the meat and potatoes of life. Giving blood? It doesn’t even measure in our society’s economy. This week, I chose to go against my fleshly instincts and give away a bit of my time, as well as some of my passively created O negative.

It happens that the O negative blood type is the most sought after by the blood banks. My particular vein juice is two things – rare and universal, the latter being the most significant. It means that my blood is good for anybody that needs blood; whereas, in the event I suffer major blood loss during the time of a nationwide blood famine…well, I’m most likely screwed.

I am the Omega Man!

Donating blood is one of the most reasonable things for me to do to help people. So I’m brought to wonder why I’ve worked minutes from a major blood bank for several years now, and I’ve just now gotten around to making it happen. I think the simplest explanation is that I’ve been fooled. I’ve allowed myself to think that I’m too busy and too overtaxed with stuff at work to take the time.

Over the course of my lifetime, I could potentially donate enough blood to help hundreds of people, and I’m preoccupied over…what? I won’t get into all the things I worry about, but I can say that none of them are worth missing an opportunity to bleed for another human being, especially when there’s free coffee and cookies afterward. I spent about an hour at the blood center, and it seems to me that it might have been the most worthwhile thing I did all week. An hour goes by so quickly in our digital age, doesn’t it? Somehow, this hour was tinged with an eternal vibe.

Reflecting later on the process of blood donation, I see a distinct beauty in the act of giving a part of the body, especially the quintessential, life-giving part, to bring aid to another human being. It seems as though, in our age of the impossible-made-possible, that someone would come up with a way to synthesize human blood – to create some slicker, more sanitized way to keep people alive when their levels are lacking. But there is no better way. We still must resort to this barbaric practice of lancing people in the arms with metal spikes and draining their blood. Beautiful.

The older I’ve gotten, the more sensitive I’ve become to the significance of certain activities; more directly, I’ve grown keenly aware of the fact that I spend 90% of my time and energy on bullshit that lacks even 10% significance. So giving blood – that was me sparing a piece of that 10% that I still maintain some direction over – and giving it over to something that must matter to someone out there. In doing so, I felt like I could breathe again.
Now, my tingling heart searches…searches for the next thing I might do to ground myself, to bring sense and meaning to my place within the spinning whirlwind of our society.

She’ll be less than thrilled that I’m doing this, but I’d like to dedicate this post to my dear sister, Tracy. I’ll refrain from details, but she’s been quite sick for some time now, and it was my visit to her a week ago that reminded me that some priorities cannot be pushed aside for long. If you are the praying sort, please look to the sky for my only sister.

I love you, dear lady.