The Sin of Security – Missing the Point

“So King Solomon became richer and wiser than any other king on earth…Solomon built up a huge force of chariots and horses. He had 1,400 chariots and 12,000 horses. He stationed some of them in the chariot cities and some near him in Jerusalem. The king made silver as […]

“Blessed are the poor in wallet,     for if they work really hard, they will get a piece of the pie. Blessed are those who mourn their lack of the newest smart phone,     for they will receive the most awesome model for affordable,    […]

Why I Won’t Read (or Watch) The Martian

The reviews are nearly all positive, from critics as well as fans. Andy Weir’s novel, The Martian, is a brilliant piece of hard science fiction, and the film adaptation is a sterling representation, likely to garner Oscar recognition. I’m staying away from both versions. I’ll have to […]

I have this picture on the home screen of my phone. It’s a close up of Samuel swimming the butterfly. His face is what makes it so compelling. The determination evident there is spine tingling. It makes me think there’s something big that goes on when a […]

“Remember the Sabbath day, to keep it holy. Six days you shall labor, and do all your work, but the seventh day is a Sabbath to the LORD your God…For in six days the LORD made heaven and earth, the sea, and all that is in them, and […]

It’s ten past lunchtime, and I decide to stop for fish & chips. I tell myself it’s healthier than the average fast food fare, even if it is still fried, and I happen to be near a place that is about a nine out of ten on the […] 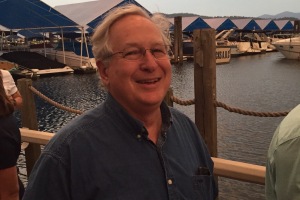 Faces in the Sea #13 – Ernie the Magical

I am struck by the way certain realities in our common world appear much like beacons–indicators of deeper truths in the unseen world–as in the way every fraction of Life exists only in the wake of some other thing’s death. And for each of […]

Words with an Old Friend

Suppose you suffered from a pain so long you learned to forget it was there, like a thin needle – too small to see, but too bothersome to ignore – was inserted into your flesh while you were preoccupied, and it remained festering for years. What would it […]

The Race to Waking

“Awake, O sleeper, rise up from the dead, and Christ will give you light.” Ephesians 5:14         Researchers estimate there are one billion earth-like planets in the Milky Way galaxy alone. Multiply this figure by the over one hundred billion galaxies in […]