Touching ground at the house’s front stoop, I found release from the stairway’s imaginary vortex. Encasing the doorstep were two walls of lattice, oddly suspended in impossible green ivy – impossible because it was a shade of green only found exiting Malaysian assembly lines, where pint-sized slave workers callous their fingers painting plastic in effort to earn a day’s worth of life, and boats laden with other sorts of landfill fodder then transport that ivy-colored plastic to arrive in places like this, where we’ve better things to do than grow life. So it’s stolen away – woven into additional, lattice-shaped plastic. And this plastic embedded plastic, it ushered me on to the place I wanted to avoid, but knew I could not.

I stood outside the front door of the miserable stationary house, faux wood door staring me in the face with its sign placed at a shallow height that made me wonder if its words were intended to be read by a man’s navel. It was makeshift, could hardly be called a sign, really – scrawled by a childish hand with marker of blue, which appeared to drain itself of ink as it progressed down the green page of craft paper, like the marker had sputtered the last of its artistic life, sacrificing its final breaths for the sake of that stupid sign, or the sign maker wrote the text vertically, after the paper had been taped up, skewed to the right, suspended by two overlong strips of invisible tape. 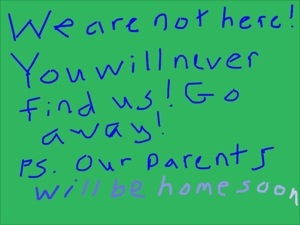 Pitiful sign. Silly, wretched, pitiful sign. Couldn’t keep away a damn thing with that sign. Couldn’t prevent a case of the sniffles from entering the house with that sign. The inevitability of the moment crept its way up my back and crawled into my mind – my mind that didn’t feel much like mine in the moment. I felt stolen from. If there were anything brave, anything strong, anything of merit that was added to my character in nearly four decades of life, it was stripped from me in the dwindling light; any dignity that came with being the person I thought I was became vapor at the reading of those words in the sputtering blue marker.
It could have been me. That useless sign – could have been me writing it, just slapping it up there, and wasn’t it my muscles moving my legs to the base of that door and my own hand, hypnotized by the groaning breeze and twilight’s depression into reaching forth to grasp the knob, jiggle it, and why no surprise that the infernal thing wasn’t even locked; for all the foreboding which inspired the sign’s hasty composition, no one thought to lock the damn door? I pushed this door inward, so lacking in weight because of its fakeness, sensed the stationary house take a breath with the opening of its airway, pressed into disconsolate gloom.