Five miles outside Pueblo’s city limits, it began to snow – not the fluffy white stuff that makes a person think of cozy fireplaces and hot cocoa and Santa Claus, but an ugly sort that is something of a cross between snow and ice, such that it becomes sticky and attaches itself to road signs and tree branches and car windshields. Rachel cursed under her breath, turned the wipers and defroster to “HI”, hoping to keep some semblance of visibility. She hated driving in bad weather; one of her greatest fears was to become stranded, broken down in the middle of nowhere, fodder for the elements or for strangers with dark intentions.

Even as ice began to grip the outer edges of her windshield with its cold tentacles, Rachel perceived it was no longer just her circumstances or responsibilities or her brutish, controlling husband seeking to keep her from Pueblo’s heart freeing air – it was the earth itself, intervening with sharp, elemental force. She sensed the world and every one in it were conspiring to keep her enslaved, barely alive inside a suffocating glass box. She cursed again, and the tears crept up. Groping for any sort of aid to keep her from losing her emotional grip, she threw her hand down and flicked on the radio. It was tuned to a station that played pop hits in the Denver area; however, here, just outside tiny Pueblo, it was mostly static, though laced within the white noise, Rachel cued in on the melody of a song she knew but hadn’t heard in years.
“…take my hand
We’ll travel south cross land
Put out the fire
And don’t look past my shoulder.”

Defiance rose up in her at the hearing of the words. She blindly spun the volume knob, and the static grew deafening, but all she heard was the song.
“The exodus is here
The happy ones are near
Let’s get together
Before we get much older.”

She cranked the volume higher, so high the speakers wildly distorted, the static and music became blurred and all her world was awash in a cacophony, and her ears felt like they would melt and bleed. The extremity of noise was painful to the point of numbing, and Rachel found it oddly comforting. Her left hand found the controls to the car’s power windows, and one by one, she lowered the windows, allowing the torturous ice to invade the car’s warm cabin.

Frigid needles pelted her dashboard and seats and stung her in the face and hands, which became frozen lumps on the steering wheel. She inhaled deeply, breathing in hundreds of tiny, crystalline knives, then unleashed an agonized scream, followed by another. From Rachel, the earth – its snow and ice and its myriad of human encumbrances, was the recipient of an emphatic middle finger. She was making it to Pueblo. Nothing would stop her.

Through distorting waves of ice on her windshield and the flecks of snow attached to her eyelashes, Rachel beheld a sign. Entering Pueblo, it said. 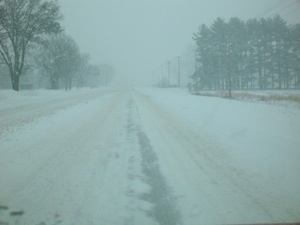