The “We Can Be” Anniversary

There’s been a wandering in my flow recently, perhaps more of an arterial clog of the brain. The content is still floating about, my heart still capable of visualizing, but I feel stuck behind the wheel of a compact car in the midst of a demoralizing traffic jam. So it is with a hand gripped white and another lowering the window that I lean over and attempt to shout my way through this strange, frozen malaise.

There’s a song that my boys have been reciting recently, something they’ve heard playing on the Disney station – “You can be who you wanna be!” the chorus exclaims. Such a proud, American statement it is. I think most of us grow up with a similar mantra entrenched in our minds. It’s a stupid idea, when you pause a moment to think about it. Not everybody can be smart or pretty or rich or athletic, and those are all things most of us wish we could be. A wiser statement might be, “You can improve who you are.” – the last three of those words being the most relevant. “Who. You. Are.” Because, despite all of our efforts toward developing into stronger, better people, nothing seems to change the fact that we are who we are.

We are who we are.

I feel a disturbing tremor just typing that sentence. I’ve spent so much of my now nearly 38 years attempting to be something different than I am, and it’s turned me into a giant, festering knot of anxiety. It’s turned me into a person who can hardly tell the difference between the temporal and the eternal. To the detriment of my wife, it’s turned me into someone who can scarcely relate to her most of the time, because it is impossible to relate to another person when you’re so busy trying to distance yourself from the true you.

It’s been a hard year for me; that’s no secret. I suspect it’s been a harder year for her. A hard year, leading to this anniversary, the 12th. A hard year of hard conversations and me confessing to her (and now, to you) that I am ashamed of who I am. I am ashamed of my own neediness. This is a low place to find oneself, but it’s the place you must come to before your life and relationships can get better, because shame, I find, is an incredibly adversarial emotion, and it turns me and everyone who disagrees with me into an adversary. Ms. Christmas and I disagree a lot. For that reason, my shame has often times turned her into an adversary. Fortunately, for the good of me and for my children, Ms. Christmas is who she is – one of the most stubbornly loyal human beings ever fashioned by God. I suppose she, like me, sometimes wishes she were different.

Thirteen years and some odd months ago, I lay restless in bed, the echo of a voice upon my brain – the voice of Ms. Christmas. We had spoken many hours that night on the telephone, as we often did those days. I gave up trying to sleep, and picked up my guitar, strummed it and listened as a song materialized.

The chorus:
“If God in heaven brought us near in words, but not in sight,
from Him I would request the grace of one small miracle –
that I could sit with you, my friend, and talk with you awhile.
And we would see pieces of we.
May we have peace.
May we have peace with us.”

I never understood at the time, nor in the many years following up till now, why that song showed up when it did. Was it just me, being a stupid romantic over a girl I’d yet to meet in person? I now suspect I know. I believe it was a prayer – one more sincere than I’m capable of speaking on my own. I believe prayers are eternal in nature. And so I believe that this prayer-turned-music still hovers with us today. 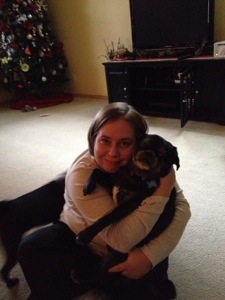 Happy 12th Anniversary, dear Ms. Christmas. Today, I repeat the words of that prayer, that “we” – that strange, confounding combination of “me” and “you”, has peace. That we find eternal breath between us.
That We can be who He wants us to be.
I love you.