For Lent, I Give Up Nothing

“Back the camera up just a bit, and you are nothing but a human being, floating through time and space…”
Vapor [A Meditation] – The Liturgists

I recognize I am a solid week overdue to be posting something Lent-related, but I suppose to worry about such tardiness would be in defiance of my giving up Nothing for the occasion.

I’ve given this a lot of thought, and I truly believe I’ve made the best choice in deciding to give up Nothing. A few other options were considered. Coffee was the first to come to mind, but the temporary abstention from coffee has become a bit too fashionable for my taste; and besides, the ensuing migraines from lack of caffeine would likely ruin the holy experience for me. Chocolate was another consideration; unfortunately, it occurred to me in the midst of my consumption of a fudge brownie. Too late. Too boring, besides.

Cigars. That one popped into my brain for half a second, before I snubbed it out like a bad counterfeit Cuban.

It was only this morning, four days past the start of this sacred Jewish tradition, that the thought occurred to me, like an unexpected slap in the back. I was watching “Joe Vs. the Volcano” on television. God only knows the number of profundities which have happened upon the minds of men and women while viewing this film. No doubt they are many. You already know the scene. It’s the same one that approximately fifty-eight thousand bloggers before me have cited as being meaningful to both the religious and the wordly. 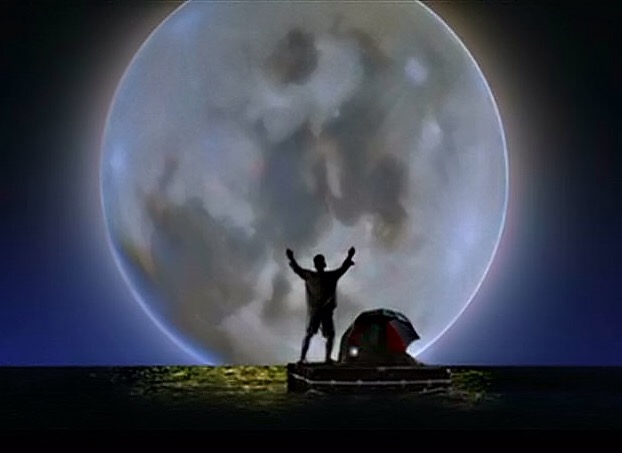 For much of the movie, Joe is a worried man. “Worried” doesn’t adequately describe him. He is scared. He’s shackled with fear. Fear of what? Of everything. Of Nothing. This is what he begins to learn, as he’s informed he’s terminally ill, and he’s forced to confront his impending death. All his life, he’s been afraid. Of Nothing. Until he was faced with the loss of everything, he could not see it. It was all Nothing. Smoke. Vapor. In that moment, beneath the overwhelming gaze of a sentient moon, he sees it, perhaps for the first time.

I wonder if there is hope for me to see the same thing – for me to understand that I’ve spent close to all of my fifteen-thousand days on Earth obsessed with Nothing. Honestly, forty days of Lent are not adequate. I should aim for more. I should aim to give up Nothing for the rest of my life.

Here is a visual I try to keep in the forefront of my mind: Stretch out your arms as wide as you can, as though they were wings. Now imagine that this distance – that of your entire wingspan – represents the sum total years of all Existence. Then imagine someone were to file the slightest bit away from one of your fingernails. This would wipe out the equivelent of all of human history. And my life and yours? Too infinitesimal to measure. When you think about life in this context, each and every one of us is near the end, even as we’re near the beginning. Each of us teeters upon the edge of this expanding Universe, suns and planets and whole galaxies spinning about us. And rather than standing with arms raised, in wonder of it all, we fixate upon Nothing. At least I do.

I’ll be honest. I’m likely to falter in this endeavor to give up Nothing. I already have. As I write this, my seven-year-old chats in my one open ear (the other is obscured behind a headphone) about his recent adventures in the world of Minecraft. It’s pretty damn distracting and frustrating. But it’s also Nothing. So, here’s what I’m going to do: I’m going to get back on the wagon. And when I fail again, which I’m sure to do, I’ll get back on again. And one day, if I’m persistant, I may lose my obsession with Nothing and experience a few blessed moments of freedom.
I just may.