Last month, I joined a book club. I confess it’s a small one, perhaps too small to refer to as a club, as we are only two members, and one of us is soundly dead. Mind you, this deceased member – the club’s founder, in fact – was alive and breathing when he first extended an invitation to me, his son – an invitation I declined at the time but have now, some thirty years late, accepted with reverence. So begins the Dead Man’s Book Club.

Human memory is a strange, fickle thing. Most of us struggle to retain the memories we find most useful while unwittingly squandering precious brain capacity on seemingly pointless memories. One of my pointless memories is the image of a book – a thick, ponderous piece of work, dressed in hardcover and a worn paper jacket.

When I was a kid, this book made temporary home out of an end table in our living room for what seemed like a year. Likely, it was little more than a month it rested there, but as I say, human memory is a funny thing, and in a palpable way, my mind sees The Talisman still fixed there upon the same table – a benevolent specter, unseen by the home’s current occupants.

My dad relished the task of traversing the book’s nearly seven-hundred pages. Repeatedly, he challenged me to tackle the read myself, but I never seriously considered it. Now having finally partaken, I think it’s better I waited. Parts are intense and scary for a younger reader, and more importantly, I could not have appreciated the profundity of the story as I do now.

It’s a shame Dad did not live long enough for me to grow sufficient attention span and mental fortitude for us to discuss the book together in person, but here again I fall back on the strange nature of memory; for in my memory, I see him now as I did then, hefting the gigantic tome before him, citing his appreciation for the great Stephen King’s writing style – his way of weaving intricate tales and creating characters so vivid you fall in love with them, just so he can unexpectedly kill them off. I can see him saying these things and so much more. I can see myself, now having savored the tale myself, responding back to him.

“Thanks for recommending The Talisman, Dad. You were right. It’s good,” I say.

“What am I to say? You should have listened to me and read it thirty years ago!” Dad says.

“Nah, I think it’s better I waited. Now that I’m grown up, we can discuss it rightly, as men.”

“Okay, then. Let’s get to it. Favorite character and why?” he asks.

“Hard not to like Wolf,” Dad says, “The way he gives his life to save Jack. You notice the parallel to Christ?”

“Geez, Dad. Leave it to you to make a Gospel comparison out of a Stephen King book. You used to do the same thing with Led Zeppelin lyrics for God’s sake.”

“Good,” he says, grinning. “So what do think is the point of the story?”

“Hmmm,” I look up and wrinkle my forehead in thought. “I think the story is about learning, the way a person grows as he learns.”

“And the way things that once seemed impossible later become possible,” he adds.

“Right!” I say. “Like when Jack finally understands all the magic he’ll ever need is inside of him, and he stares into the empty face of that killer demon in the suit of armor and says–”

“‘Get thee off the skin of this world!'” Dad interrupts, his smile glowing.

“Right. ‘Get thee off the skin of this world’,” I say, sharing his smile.

“I think you get the story,” he says. “You’ve really grown up, kiddo.”

“Sure have,” says Dad, his voice sobering. “We oughta do this again.”

“Yeah, we should do it again,” I say, and I want to say something more, but I’m embarrassed. Evidently, Dad senses this.

“You always have,” he says.

“Not like I used to,” I say. “Not little stories about kids who accidentally lock themselves in the fridge and blow themselves free with a shaken can of root beer. I mean big stories. I mean the make you think sorta stories. Kinda like…”

“Crazy because regular guys like me don’t write stories. It’s not normal.”

“Maybe you didn’t learn Jack’s lesson from The Talisman after all,” he says. “Remember? All the magic he ever needed was where?”

“Inside him. Who else is going to write that big, make people think story if you don’t?” he asks.

“Right. So get to it, then. ‘Right here and now’,” he says, quoting Wolf’s favorite mantra from The Talisman, chuckling as he does so.

“‘Right here and now??'” I respond in a growling voice, which I imagine sounds like Wolf’s might sound.

Meeting One of the Dead Man’s Book Club, adjourned. 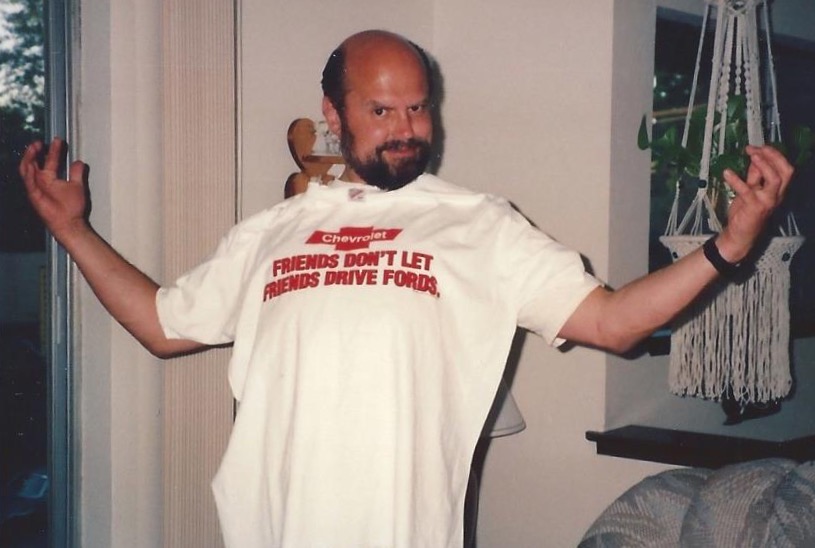