I could be doing anything in the world right now. The same device logging these words is capable of receiving, through its magical roots in the digital earth, enough stimulation to occupy me for a thousand lifetimes. Even now, there are several of those stimulants beckoning me, like ghosts in the media fog.

There’s a new Marvel original series available on Netflix, “Iron Fist”, and I haven’t seen any episodes yet. My nerd brain buzzes just thinking about the hours of zoned out bliss that would offer me. 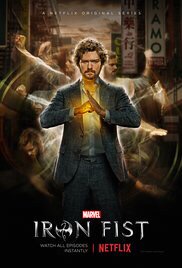 I’m less than a week into a one month trial of HBO Now, and they have this series called “Crashing”, written by and starring the hilarious and endearing Pete Holmes. I’ve watched every episode up to the finale. That final episode has been whispering my name for days. “Luke,” it says, “watch me! Watch me and experience all the fulfillment you’ll ever need in under thirty minutes!”

I posted a rather humorous news video starring myself on Facebook recently. I haven’t checked Facebook in awhile. I could glance there to see how many cry-laughing and heart emojis I’ve accumulated since last night. That would give my poor tired brain a sweet shot of dopamine.

I saw one of those online quizzes recently that teaches you to analyze how you grip the steering wheel when you drive, and with that information, the quizbot can determine what sort of personality you have. Doesn’t that sound interesting? I could check out that quiz and find out if the creators are on to something, or if they’re full of shit.
And I shouldn’t leave out the new Dark Tower Movie trailer that hit earlier this week. I’ve only watched it nine or ten times, and the goose bumps become more plentiful with every viewing.

I could be doing any one of these things, or a million others, but I’m not. Instead, I’m here, writing to you. I’m writing to you out of a well of Boredom. It’s a shallow well; I fear it grows more shallow by the day, but it remains here inside me, fueling my creative endeavors this day. I believe Boredom is the seed of every great and terrible thing humankind has ever made. It could be even the universe itself was birthed from Boredom –– that Being itself grew restless in its infinite density and felt compelled to explode into the beautiful expanse we’re all now floating through.

You may have read about the dying of the bees. Nobody knows how worried we should be that the wild bee population is shrinking away just like the rain forests, but most agree that a lack of bees is bound to come around and sting us in the ass. (Sorry, couldn’t help myself.) The general belief is that our houses are to blame for the bees’ demise. We’ve cleared huge swaths of native vegetation in order to plant our endless rows of McCraftsmans and replaced that vegetation with our sad little gardens, sparsely populated with exotic plants and flowers the local bees aren’t developed to feed upon. In our efforts to remain comfortable, we’re killing a part of the ecosystem we depend on to sustain us.
I think Boredom is the same way. Boredom is uncomfortable, and it is human nature to seek the fastest, easiest method to relieve discomfort. So most of us carry around these little glowing comforters, and with a quick screen glance, we can kill Boredom just as easily as swatting a pesky bee. Bored waiting in a long line at the grocery store? Grab your phone, check email, check Facebook, check Twitter, repeat if necessary. Bored on a plane? Pull up some Go Go entertainment and stream away the doldrums. Bored sitting on the toilet? (You thought I wouldn’t go there. But I did.)

I sometimes wonder how few creative achievements we’d still enjoy today if our current technology had come along sooner. What if the iPhone had been around in the nineteenth century? Would Mark Twain have been too busy posting pictures of his dinner to write novels? Instead of creating Tom Sawyer and Huck Finn, maybe he would have copied and pasted some previous writer’s work into a chuckle-inducing meme for which he would have garnered much digital love. And a hundred years later, we wouldn’t know the name Mark Twain.

I’m working on a story now that I almost didn’t write because I worried it was too boring. It’s nearly eight thousand words and counting, and if you were to ask me what it’s about, you might get bored just listening to me describe it. The story follows a man who could use more Boredom in his life. For me, Boredom has become synonymous with Space. How is it that as the universe continues to expand in size and complexity, we manage to make our own world feel so small? Maybe it’s because we’ve come up with so many ways to keep our eyes looking down. Perhaps what we all need is a good dose of Boredom to remind us to look up again, to inspire us to look beyond the cheap and comfortable, and delve into the open Space of that which has yet to be made.