Marv has the world’s biggest heart. People always say this about retarded people, but in Marv’s case, it’s hardly an exaggeration. I’ve never learned the details of how or when he came to work at The Coffee Joint – he started there years before I even heard of place – but he’s become like a mascot; people ask about him all the time. All the time. I find it annoying. Just like I often find him annoying.

I know what you’re thinking. What sort of asshole gets annoyed by a retarded guy? I’ll tell you who – an honest asshole. Those other customers who ask about him, they do it for one of two reasons – they aren’t around him often enough or they feel guilty for being smart and normal and for having an important, good paying job and a family, while Marv is simple-minded and homely and smells bad because he only showers every few days, and his employment is nothing more than charity from the owners. He does such a poor job of cleaning tables and sweeping and mopping that they staff a spare barista to follow after him and pick up what he misses.

But people still seek him out, and they pretend to care enough to converse with him while they wait for their to go coffees. With plastic smiles, they back out the door while Marv continues to prattle on about baseball or the roast beef he had for dinner the night before, and when they’re halfway to their cars, he’s still talking. Eventually, he catches on, pauses and yells, “Ok! See you tomorrow, anyway!”

The Coffee Joint is like my office. Some of us have the luxury of calling any place with internet access an office, and I’m one of those. I like my office where the wifi is fast and the dark roast is bottomless. If The Coffee Joint were like a real office, Marv would be the pesty co-worker who causes you to wait as long as possible to go to the bathroom in order to avoid passing his desk.

“Most people don’t think that robots got feelings, anyway.” He said this to me the other day. I knew when he said it that he was talking to me, but I tried to ignore him in hopes that he’d think I didn’t hear him and give up. But that sort of trick doesn’t work on guys like Marv, and he doesn’t possess what you’d call an “inside voice”, so it’s impossible to think anybody would ever fail to hear him.

“How do you know, Marv?” I answered with a sigh.

“Cause nobody never waves at a robot.” he said. “When people wave at another person, anyway, the other person is always gonna wave back, but not a robot. A robot waves all day long, and people are just walking right by him, anyway, like he’s not even there.”

“See a lot of robots around, do ya, Marv?” I said, snatching my mug and standing for a refill.

“No Marv, can’t say I see many robots around, especially not the waving kind.” I said.

“See? That’s what I say, anyway! They just wave and nobody’s payin’ attention.”

Before moving back to my seat, I decided it was time to hit the head, before Marv could start to decry society’s oversight of waving unicorns. When I emerged from the men’s room, Marv was charming an older couple by the pastry case with his talk of robots and his intention of regarding their waves.

Hours later, after Marv left for the day, I arose to retrieve my fifth refill, when the memory of the ludicrous robot conversation tickled me. I found myself chuckling quietly. It was a strange thing to bring up, even for Marv. He’s often loud and obnoxious and lacks social sensibility, but he isn’t nuts. What was all the talk about waving robots? I flopped down in my chair, flicked a sugar packet with my index finger, and gazed a long time out the window at a decorative tree on the streetscape – its leaves a surreal blaze of red against a backdrop of dull gray; the leaves were falling by ones and twos.

An unexpected tinge of sadness snuck up and pricked me; I felt sad about that tree – not because it was losing its leaves, but because of the people – the ones lumbering down the avenue in SUVs or speed-walking to their offices – the dozens glazed and staring, intoxicated by the warm ecstasy of glowing, rectangular screens – none of them aware that this tree, this glorious tree was arranging a spectacle more astounding than anything else their day was likely to provide. Until wet salt crossed my upper lip, I did not notice I was crying.

Swiping a wrist across my cheek, I glanced nervously about the coffee shop, embarrassed at the prospect that people may have noticed my small emotional display. Nobody saw me. Just as nobody saw the little tree.

Marv, I thought. I bet Marv would notice that tree.

I attempted to focus back on my work, but the falling leaves continued to arrest my attention. Either I’d overdosed on caffeine, or Marv had gotten to me with his silly talk of waving robots. The tree leaves, are they waving? I thought. If someone does not notice the tree’s cascading leaves, does the tree become sad? A great thing about making your office in a coffee shop is that you can leave work whenever you want. I gave up on trying to get anything more done and packed up.

Driving home, I began to notice that so many trees lined the streets on this route I’d driven hundreds of times, how so many shown iridescent – amber, orange, crimson. I wondered who would remain here to notice these trees. The day was misty, as they all are this time of year. The afternoon welcomed a drizzle, and as I approached a stop light, I stared blankly at the sheen upon the charcoal asphalt. I spied a reflection there, for a second appearing, then vanishing and reappearing. It was a hand – waving. Following the line of pavement, I found the reflection’s source – a crossing sign, blinking, waving.

Beneath the repetitious signal, he stood. There was Marv, waving in return. His back to me, he couldn’t see, but I waved as well. 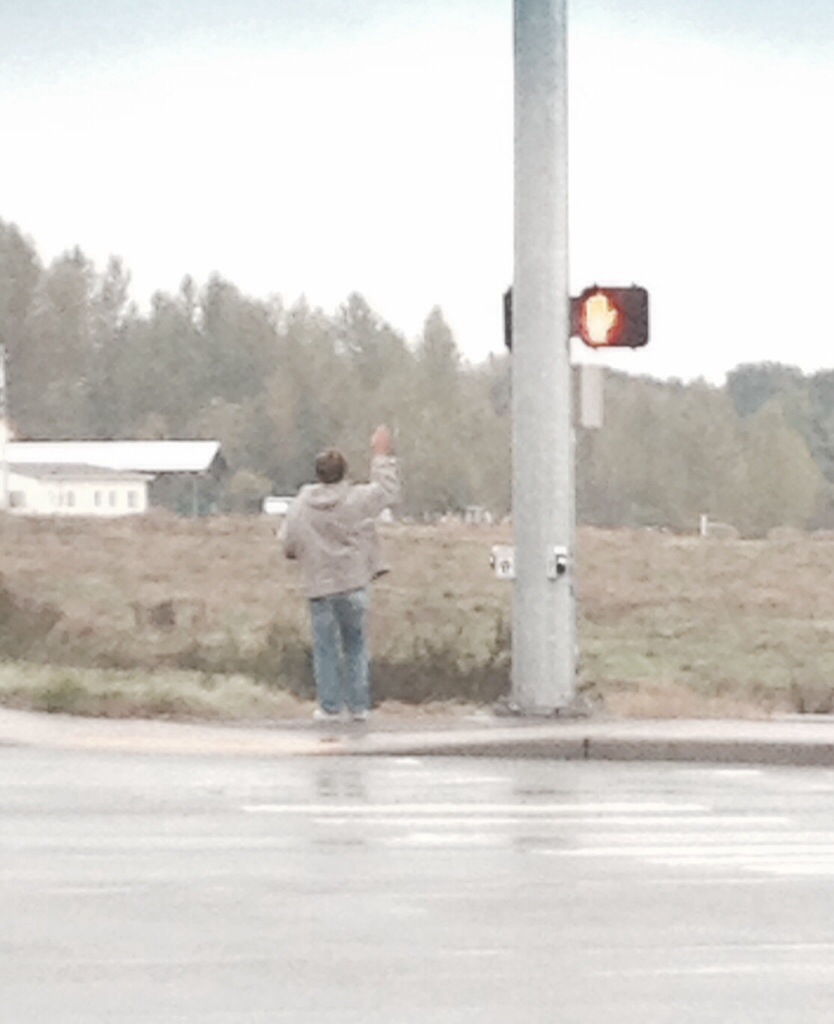