Jesus, if you were here with me now, I would hug you fiercely. A day or an hour or ten minutes from now, I might ignore you or jeer you with sarcasm or scream at you in anger, but were you here this second, I would grip you […]

I’ve thought for some time now that, given the current escalation of political malevolence, I would repost this from roughly a year ago, written during the height of the presidential election campaign. A year later, I am attending the same conference I was at when it was first […] 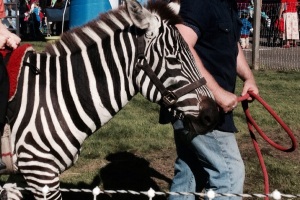 I learned yesterday it is possible to domesticate and train zebras. In fact, they can be made docile enough to trust them in close proximity to young children. Zebras are stunning animals to see up close. They are almost otherworldly, the way their black and white stripes display […]

As Absence Does to Worry

I’m hoping for feedback on this one. I plan to enter it in a story contest next month, and I want to get a head start on tweaking before I submit it. Comments, please! (Note: I’m working with a 750 word limit, so don’t bother telling me it […]

This is something I wrote a few years back. It was inspired by an image of Miley Cyrus, back around her Hannah Montana days. My prayer for her now is that she eventually find freedom from the web of lies that she’s been lured into, that she remembers […]

There are those who write and those who call themselves “writers”. They’re known to hold quiet celebrations upon learning to describe themselves this way. I’ve come to find the characterization oddly repellent. For me to find pride in being labeled a writer – it feels like developing severe […]

The first sensation he discerned as he awoke was the taste of blood in his mouth. There was the taste, then the overwhelming urge to vomit, his stomach outraged with intake of bodily fluid and from enduring the inevitable aftershocks left behind when adrenaline blitzkriegs through a body, […]