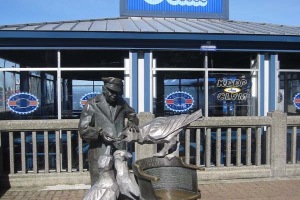 It’s ten past lunchtime, and I decide to stop for fish & chips. I tell myself it’s healthier than the average fast food fare, even if it is still fried, and I happen to be near a place that is about a nine out of ten on the […]

Suppose you suffered from a pain so long you learned to forget it was there, like a thin needle – too small to see, but too bothersome to ignore – was inserted into your flesh while you were preoccupied, and it remained festering for years. What would it […]

The Race to Waking

“Awake, O sleeper, rise up from the dead, and Christ will give you light.” Ephesians 5:14         Researchers estimate there are one billion earth-like planets in the Milky Way galaxy alone. Multiply this figure by the over one hundred billion galaxies in […]

I Am Not As Strong As a Twelve-Year-Old Girl, A Wake Up File

“Dad?” little Isaac says. A pair of ducks float lazily on the surface of the urban lake behind him. He embraces a half gallon jug of murky water, much of which has splashed onto his chest, soaking the front of his shirt, as he’s wrangled it for half […]

“I Just Don’t Understand It” – The Marge Gunderson Factor

“There’s more to life than a little money, you know. Don’t you know that? And here ya are, and it’s a beautiful day. Well, I just don’t understand it.” – Marge Gunderson, Fargo         I’m a little embarrassed to admit I waited nearly twenty […]

“Courage is being scared to death, but saddling up anyway.”- John Wayne        I’ve always loved this quote by John Wayne. Whenever I read it, I think of the archetypal cowboy, brandishing his revolver, jumping on a horse, and galloping into a storm of bullets to […]

Here’s an idea that ought to twist your brain into a pretzel: in science, the present does not exist. When I first learned this, my first thought was of Charles Dickens. If he’d understood the only identifiable aspects of time are Past and Future, would he have cut […]