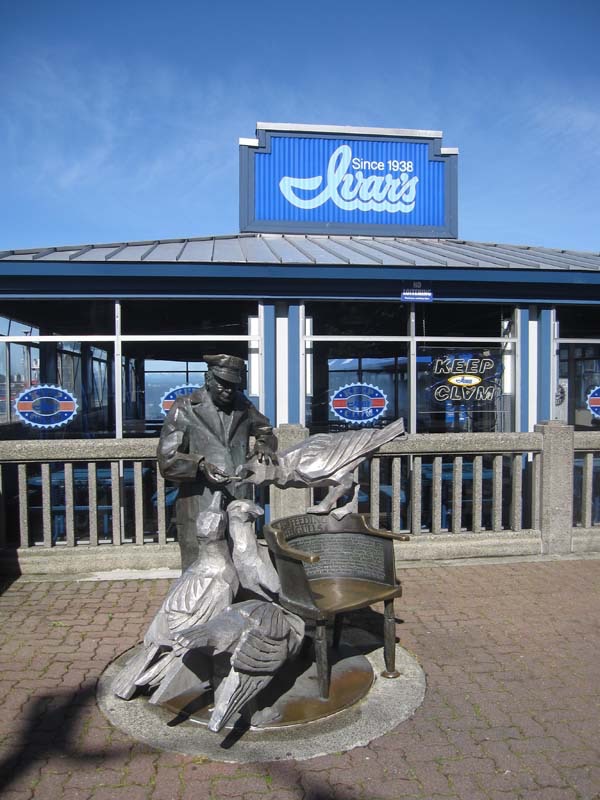 It’s ten past lunchtime, and I decide to stop for fish & chips. I tell myself it’s healthier than the average fast food fare, even if it is still fried, and I happen to be near a place that is about a nine out of ten on the fish & chips awesome scale. It’s a sunny day in Seattle, but it’s October sun, so the radiance is tempered by a nearly imperceptible veil of fog, and the air is cool. Fish & chips weather.

I park, noticing the lot is not too full. Good. My lunch won’t wait long. I walk to the door as I fumble in my pocket with a tangled set of earbuds. I’m anxious to liberate these buds, so I can continue listening to a podcast about plasma waste converters. Before reaching the door, I spot a soiled oldster on the sidewalk of an adjacent street. He’s holding a cardboard sign. We’re near the freeway onramp, which is where you tend to see displaced people with cardboard signs, and I wonder if drivers are better at extracting change from their ashtrays when they are about to get on the freeway.

I approach the cardboard sign man, and even though I’m a big guy, I’m quiet enough that he doesn’t sense my presence until I speak. “Sir, would you like something to eat?” I say.

He starts and turns to face me. His lips part within a grubby beard that reminds me of an abandoned bird’s nest. A line of milky snot connects his nose to his chin (like I said, the day is cool) and his grimace reveals a mouth of missing or soon to be missing teeth. He smells bad.

“You got it,” I say, and as I walk to the door of the restaurant, he lofts a volley of thankful comments so profuse, it makes me uncomfortable.

I go in and order the food – fish & chips for me, fish & chips for him – mine for in here, his for out there. At the table, awaiting my meal, I begin to arrange for a time of solitary dining. Bric-a-brac cleared, earbuds extracted, podcast queued – there are few times in life that bring me more peace and pleasure – and here comes the food.

I rise to deliver the homeless guy’s lunch, and at first I worry that he may have taken off, which would be a bummer because fish & chips aren’t cheap at this place, and I don’t think I have the appetite for two orders. I’m relieved to see he’s just wandered a little ways down the block. He’s facing my direction, but he doesn’t see me. Either I’m a lot sneakier than I give myself credit for, or this guy’s not very observant. His sign says he’s a vet; I suppose he could be lying, though he does sport a Navy cap atop his grubby crown. Do they give Navy hats to just anybody? Three feet away, and he finally notices me. His lips again part in that grimace-smile, revealing those swollen gums and rotting teeth.

“Yeah,” I respond, “hope Coke is okay.” Then I think that Coke isn’t going to help this poor slob’s dental issues any. “What’s your name, sir?” I ask. My choice of sir is a conscious one. I figure a guy in his situation doesn’t get called sir very often; he’s probably more used to mister or dude or at best, bro, but I imagine he only hears sir from police officers, whose sad duty it is to shoo hobos away from places they’re not to be.

His eyes brighten, almost seem to shine against his chapped and dirty skin. “Name’s Lee,” he responds. I’m horrible with remembering names, but for some reason I know I’m going to remember his.

“Hi Lee. I’m Luke,” I say, reaching out to shake his hand. I confess that I sort of want to give Lee a hug, but I’m worried he’d get his beard boogers on me in the process. Also, he’d probably think I was the strangest do-gooder he ever met. Turning to leave, I say, “God bless you, Lee.”

“Hey, God bless you too, Luke!” he hollers after me, and he keeps hollering – another barrage of “thank you” and “God bless” and “have a great day!” – and again I’m discomforted by the audacity of his gratitude.

Back inside, mealtime commences. It is delicious. Occasionally, Lee comes into view through one of the windows to my right. He’s still pacing the sidewalk with his cardboard Help A Homeless Vet ad, pausing every now and then to snag a bite from his lunch bag.
There’s a famous quote by Martin Luther King Jr. – “The arc of the universe is long, but it bends toward justice.” I’m thinking of those words now, and I wonder where this moment falls along the arc of justice. I was hungry, and Lee was hungry, and now we’re both fed, but I’m in here while he’s out there. I think about his over-the-top display of appreciation, and I wonder if the hunger a guy like Lee suffers from is quite different than most of us think it is. Hunger of the body is gnawing, but easily cured in our land of plenty. Hunger of the heart – that condition we thinly refer to as loneliness – is a hunger rarely satisfied for guys like Lee, who don’t carry mirrors, so they don’t know to extract snot from their beards, so as not to repulse patrons at the local fish bar.

Halfway through my fish basket. Feeding duties have been relegated to my left hand today. My right was used to touch skin with a lonely stranger. His soiled hand remains present on my flesh, as it does on my mind.