“Change alone is unchanging.” This old axiom is true scientifically, and it’s often easy to see. Technology changes, becomes faster and more convenient and less expensive at the same time. With technology, our relationships change from personal to digital––becoming much like reproductions of what were once authentic art […]

The Ndugo Me – Saga of a Mutinous Organ

2:33 am, Saturday morning, and I couldn’t sleep. This happens to me sometimes for mysterious reasons, but tonight was no mystery. I was in pain. It started out as a nuisance pain in my stomach–bad enough to keep me awake, but not severe enough to worry me. […]

I thought you were sleeping. It seems silly now, but you must understand, when one sees a person slumped over inside a parked car, the most reasonable conclusion is rarely that the person slumped over is dead. It was the lights from the dashboard that caught my eye. […]

Faces In The Sea #7 – Sophie the Alive

The older I become, the more beholden I am to the fact that human beings are the world’s most precious resource. If you grew up in the modern Western church, as I did, you’ve been told this is true. “Loving God, Loving People” – that’s the name of […]

Marv has the world’s biggest heart. People always say this about retarded people, but in Marv’s case, it’s hardly an exaggeration. I’ve never learned the details of how or when he came to work at The Coffee Joint – he started there years before I even heard of […] 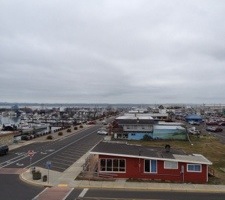 If conservative outrage over what often appears to be a move of our society toward feminization holds merit, then the seaside town of Westport, Washington is certain to remain one of the few cities to maintain its staunch dedication to undaunted masculinity. You’ve seen the charming little Oceanside […]

Rest Stop, 2 miles the sign read. It leaned at a near forty-five degree angle on the shoulder of I-25, southbound to Pueblo. Rachel sighed, then squirmed in the driver’s seat of her forest green Subaru, attempting to awaken the sleeping nerves in her backside and simultaneously assuage […]