More Human Than We Know

While he was eating, a woman came in with a beautiful alabaster jar of expensive perfume made from essence of nard. She broke open the jar and poured the perfume over his head.
(Mark 14:3 NLT)

I’ve found this story a cross between touching and confounding. Beyond the unusual part of dumping a slick of perfume on a person’s head, Jesus’ response to the disciple’s objection has always been a bit perplexing.

I recall years ago, I was talking with a college classmate about Christ. She was an atheist, and she cited this passage as an example of inconsistency in the Bible. Why would Christ, who is held up as the very model of charity and concern for the downtrodden, make a comment that seems to slight the poor? In retrospect, my response, though well intentioned – something to the effect of Jesus knowing that Judas was a crook; thus, the disciple’s objection to the anointing was more greed than charity – I now believe that this was only a small part of what caused Christ to respond the way he did. In fact, the reality of this scene now seems so blatantly clear to me, I wonder how I missed it all these years. I suppose that age old religious fog must have stolen my sight.

What if a friend – someone you loved dearly – gave you a gift that was so heartfelt, so personal that it moved you to the core? Then, what if some insensitive cuss were to pollute the air, in the midst of the giving, with absurd commentary about the gift being too extravagant? How sharp must Christ’s rebuke have been in that moment!

He was touched by this gift – touched deeply. By the act of an ordinary human being.
By an ordinary one of us.

In the moment I pen this, he is personally touched by my writing for him.
Do you ever wonder if you are capable of moving the heart of God? You are. 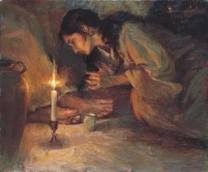