I Got Some On Me. – ramblings on religion and my experience at The Exodus Experience

“Think I’m going to head to San Francisco in the fall.” a missionary friend told me, years ago.

“Yeah. I need to get some of that on me.” His wording was often odd like that, but it was never forced – not like he was trying to be alternative when the term was first becoming fashionable; he was just genuinely different than most people. San Francisco’s beautiful, but it’s also dirty, and the homeless pee on the sidewalks. “Get some on me” sounds like the last thing I’d want to do there. Stroll the streets, see sights, be cultural and cool – that all sounds great, but get it on me?

When someone asked me recently whether I was going to attend Rooftop 519’s Exodus Experience, my heart circumvented my mind and spoke up for itself. “Yeah,” I said. “I’m gonna get some on me.” So I went and got some on me, and now I’m putting it on a page to share with you.

More than 600 people came through Pioneer Park in Puyallup, Washington on August 30th to capture awareness and support for the charity, Rooftop 519. Titled the “Exodus Experience”, the event was named in honor of Rooftop’s first child-patient, Exodus – a burn victim from Liberia who was flown to the States, where a surgeon applied skin grafts to her scars and a host family demonstrated astounding generosity by opening their home and their lives to her. She’s now back with her family in Liberia, healed more deeply than a simple medical procedure could ever achieve on its own.

If church were more like this, I thought as I walked around The Experience, more people would go to church. The people sponsoring the event were Christians. The musicians and artists who donated their time and talent for the event: Christians. Christians were everywhere, just like church. But it wasn’t like church. What made it different?

When people go to church, I think they spend a lot of time worrying about what others in the church think of them. If you are new in church, you worry whether you will be liked and accepted. If you’ve been going to a church for a long time, you worry whether you are living up to the expectations of what other church goers think you are supposed to behave like. If you are pastor of a church, you worry about whether your message is packaged in a way that makes it current and appealing and whether your worship music is cool, because the health of your church is most often determined by its numbers, so you worry about attracting and keeping members.

At the Experience, I didn’t worry about any of those things, and I got the feeling nobody else there was worried, which is notable, because several were artists, opening their insides for the world to see – 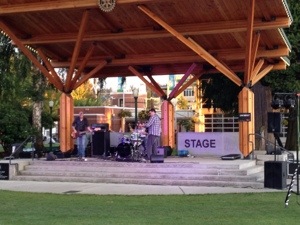 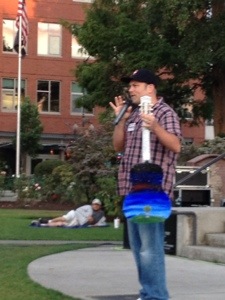 some with paint and brush… 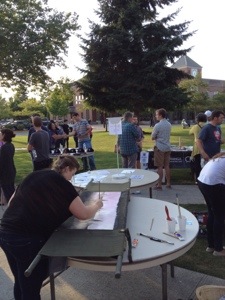 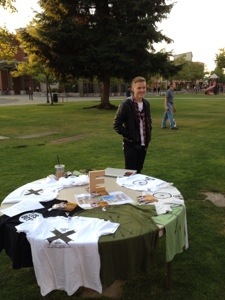 Freedom was in their work, born of a lack of preoccupation with the judgement of wORTHY eyes – their work on display, not for the glory of their own names, but for concern over broken-hearted children and families – energized by inspiration that comes from the love a Father.

It is a trend in the modern Evangelical church to advertise its aim to toss religion aside in favor of relationship – relationship of a closer, more authentic type with Christ, and hopefully with other people. Maybe this mission has been accomplished in certain ways, but lately I can’t help but feel like the modern church has sacrificed one sort of religious behavior for another. We’ve forsaken the organs and hymnals for electric guitars and catchy chord structures, but has this resulted in more intimate connections in our worship? Pastors have put away their suits and ties in favor of polos and blue jeans, but are they more approachable? We’ve all become less formal in our approach to church, but are we losing sight of our primary calling in favor of trying not to look religious? Are we forgetting to love people?

Sometimes I wonder if it’s even possible to avoid religion. Atheists and agnostics claim they do, but I find few things more religious than spending energy ignoring God’s existence or the capability of knowing such things. Certain faith bodies try to step outside religion by centering on community and trying to live missional lives, and this seems to work pretty well until they meet in groups of greater size, where they tend to fall into many of the same patterns they aimed to avoid.

I bumped into an old friend at The Experience and got to expressing some of my recent disillusionment with church. She shared similar frustrations, and I joked that we could find all the other frustrated people and go start a new church and do it the way it ought to be done, but of course, it was only a joke, because we’d be recycling the same stupid pattern that countless others have played out.

So what’s the answer? Stop going to church? I don’t want to stop going to church. I genuinely like the people there. And for all their flaws, I think most churches are doing at least a few things that are good for the community. But maybe we’re all trying too hard to not be a certain way.

The book of James says, “Religion that God our Father accepts as pure and faultless is this: to look after orphans and widows in their distress and to keep oneself from being polluted by the world.” Let’s face it: the Western church has not done well in either of the categories outlined in this verse. We’re effective at separating ourselves from the world, but we are nearly as polluted by the world as anybody else; we’re just less honest about how polluted we’ve become, even as we’ve lost sight of sin as the pollution rather than people. As for “orphans and widows”, I believe they are welcomed with open arms in most Evangelical churches, but it doesn’t seem there is great emphasis on seeking them out, and I think the church is to function as an extension of Jesus – the greatest seeker and rescuer in history.

I wonder if James was strategic with the way he ordered things when he wrote about orphans and widows and pollution. Maybe, if the church fails in its function to reach out to the broken and needy, it will fail in its attempts to remain pure in a polluted world. I guess my heart sensed this when I was at The Experience. All around were people supporting what the Bible states to be religion’s most noble cause – to comfort and provide for children who cannot help themselves, victims of geography, born in places where even common ailments lead to death. Like medics sent onto an open battlefield, supporters of Rooftop’s mission are sent by Christ’s hand to bind wounds and share His love and compassion in a world largely devoid of these things. I don’t know if Rooftop 519 is being less or more religious in doing what they do, but I suppose it doesn’t really matter. Either way I find it liberating because exposure to its mission is a reminder that life is not a story about me.

So there it is. This is what I “got on me” at the Exodus Experience. Someday soon, I hope to get some more on me. If you’d like to learn more about Rooftop 519, visit – Rooftop 519. Maybe you’ll get some on you, too.