By Lucas J. Draeger on March 7, 2015 • ( 2 Comments )
“And as far as I can see the world is too old for us to talk about it with our new words ― We will pass just as quietly through life (passing through, passing through)”
Jack Kerouac, Big Sur
It’s been my first forage into the murky literary wilderness of the iconic Jack Kerouac, (Jack would call this wildnerness “goopy”, in the same way he was prone to describe the foggy, pre-dawn streets of San Francisco) and as I invest my time in this thing called Big Sur – one reader’s masterpiece and another’s crap – I am witness to one underlying question, replaying itself in my mind. What happened to this guy? What caused his life to go from low to high to lowest low?
And the reason for this repetitive question seems obvious to me when I think about it, for in following his recollections of a two-month-long binge during the summer of 1960, I am frightened by the similarities between his observations and reflections on the world to my own. Those reflections come in the midst of his steady spiral into madness, and I can’t help but wonder – if this mental unraveling happened to Jack, could it happen to me? Is it already happening?
But there are differences between Jack and me, and I’m not talking about the fact that he was famous and a far more talented writer and better looking than me, and that he had one of the coolest writer names of all time. In fact, Jack Kerouac dulled the incessant noise of all those questions he had (and all of us writers have) about life by ingesting large amounts of booze. Fortunately, I’m a near life-long teetotaler, so I needn’t worry about alcohol taking me down. But the questions don’t go away, do they? No, they never do.
Three occasions in this particular memoir, Kerouac’s character attempts to escape the dogged pursuit of madness by retreating to a friend’s cabin in Big Sur – a place of solace where he might confront the questions. I like to retreat sometimes as well. I don’t have a cabin I can escape to, so instead I choose a park with a trail in it. It’s a public park, so there are always other people around, which is okay with me; I rather enjoy passing people on the trail and exchanging a slight raise of the chin and the eyebrows; using that park-walker sign language, we’re saying to each other, “Yes, yes! We’ve discovered something, you and I, have we not?”
There’s a spot I enjoy along the trail of the park; it overlooks a field with a creek flowing through it. I think the field may grow pumpkins in the Fall, but during these late Winter days, it contains a sort of grassy, muddy soup. Beyond the soup field, there is a busy road – a flow of scurrying cars upon it, a steady band of efficient folks, going about their important duties (passing through, passing through), and there I stand in my spot, inefficient, getting nothing done. For some reason, I find this spot grants me permission. 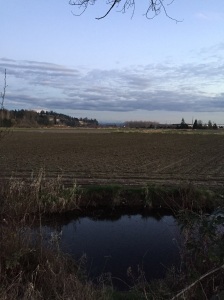 “Let them scurry along!” a voice says to me. “We can remain here, can’t we? Yes we can; yes we can.”
I enjoy smoking a cigar at twilight. The unique visibility of the smoke at that hour appeals to me most profoundly. If you’ve never smoked outdoors at twilight, you may not realize the distance your own breath can carry out into the world before it dissipates into a swirl – intermingling with the breath of a million fellow creatures before it rejoins the perpetual, entropic dance of the universe. There is me, I think as I watch my breath float ten, twenty, thirty yards or more, There’s a piece of me, floating into the evening blue. Where will it go? Of whom or what will that piece of me become a part?
There’s a term we’ve come to use in our society, “Life gets in the way.” We tend to pull that phrase out when we want to explain why we’ve failed to get together with someone we enjoy communing with, or when we can’t seem to find time to engage in activities that make our hearts come alive. I’ve dissected that phrase recently and have come to the unequivocal conclusion it is complete bullshit. What if I pair the phrase “Life gets in the way” with “the point of life is to get stuff done”?
It seems to me that the majority of us have pushed Life out of the way – forsaken Life in deference to a world of demands. Perhaps we need to give ourselves permission.
I wonder if Jack Kerouac ever gave himself permission – to be, rather than the holy father of the beat generation, just a man who loves to write poetry, with or without the adulation of all those starry-eyed beatniks. If he had given himself permission, maybe he could have escaped his fate.
Probably not, though. The man did love to party.
What do you need to give yourself permission to do?