In honor of Father’s Day, I am submitting something very different. The following is the intro to a story that came to me the other night in a dream. The lead characters are literally based on the personalities of my two beloved children. I dedicate this tale to them, for they are the ultimate of all my stories.
Pardon the novice illustrations. Drawing is not my gift, but this is a children’s story, after all.

This is the story of two valiant knights, named Sir Samuel and Sir Isaac. The knights were brothers, and they were known to be the smartest, most talented knights in all the land. The brothers loved traveling the kingdom together to see what sort of adventures they might find. One day, they embarked on an adventure more wondrous than any they’d ever known and more fantastic than they’d experience again in years.

It all started when Sir Samuel heard the news of a strange, rainbow colored creature that had been seen flying through the skies of the outer regions of the kingdom. Several of the villagers were frightened after seeing the wild looking creature; some people thought it was a magical dragon; others thought it was a strange visitor from another world. As a lover of all created things, there was one thing Sir Samuel knew – a flying rainbow colored creature could make a great pet. So he convinced his brother to come along with him to the outer parts of the kingdom in search of the flying rainbow creature. Sir Isaac, who was a fan of just about any adventure, was happy to join him.

Before leaving, they decided to have a hearty lunch so they would not grow weak along the way. The two brothers debated for a time about what sort of meal to eat. Sir Samuel favored meals cooked by a lady named Wendy, while Isaac enjoyed eating food prepared by the famous court jester, Ronald. After much disagreement, Sir Isaac, who tended to get his way in these matters, convinced his brother they should enjoy a lovely (happy) meal at the Castle of the Golden Arches.

As Sir Samuel and Sir Isaac were leaving the land of the Golden Arches, they came across a lovely lady who seemed to be quite anxious about something.

“Hark!” said Sir Samuel. “What is the matter that has the fair lady so worried?”

“It is you!” replied the lady. “I am worried for you, brotherly knights, for your are embarking on a perilous journey!”

“Worried for us?!” exclaimed Sir Isaac. “Why should you worry? We can take care of ourselves!” (Sir Isaac was a very independent young gentleman.) “And who exactly are you, anyway?” he asked the lady.

“I am the Enchanting Ms. C.” she answered. “And far be it from me to delay such an important journey! Believe me, such is not my intent! I only mean to offer my assistance, dear Sirs, to prepare you for this adventure!”

“Please, Enchanted Lady, forgive my brother’s gruff demeanor.” said Sir Samuel. “He is always slow to receive help from anybody. Truly, we would appreciate any assistance you may provide, as our journey will prove to be a dangerous one, and we are unsure of the route we shall take or the means by which we will get to the home of the fantastic rainbow creature.”

“Thank the Maker that I was able to catch up with you, dear Brotherly Knights!” said the Enchanting Ms. C. “Come with me, as I have hidden away a map of the kingdom, with the way to the rainbow creature clearly marked!”

The Brotherly Knights followed the Enchanting Ms. C to a small hut, where they found that she was true to her word. Hidden there was the map she promised, several days of food, spare armor (including clean underarmor), as well as a letter with a prayer written just for them, bidding them a safe journey.

Amazed with all the items the Enchanting Ms. C had set aside just for them, Sir Samuel asked, “How did you know, dear lady, to bring these things to us?”

“The answer to that question, good knight, is part of your adventure!” she answered with a wink, and Sir Samuel thought he saw a tear flutter down her cheek. 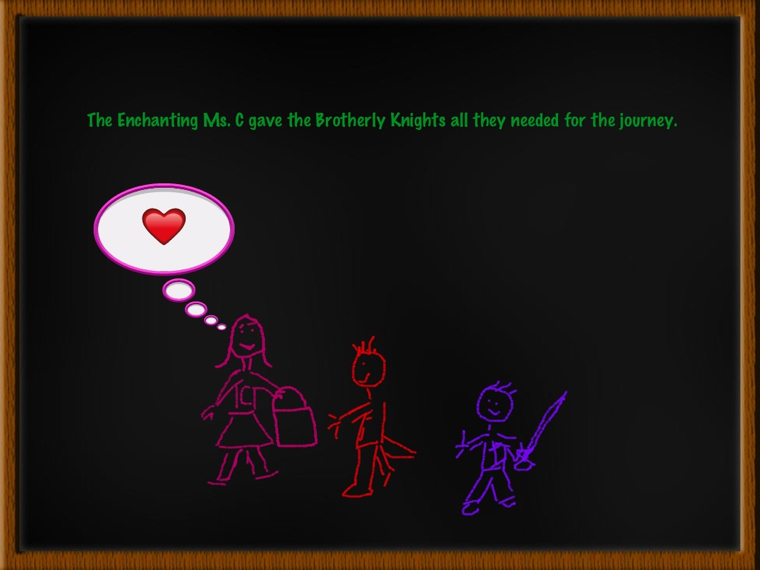 Thus, the Brotherly Knights began their journey in search of the fantastic rainbow creature. According to their map, the first part of the trip would take them across the Great Sea of Sinking Ships. Sir Samuel found the sea’s name to be slightly ominous. Sir Isaac, on the other hand, took the map in hand and said, “Come along! I will show you how a sea gets sailed!” And so they were off on the adventure of a lifetime. 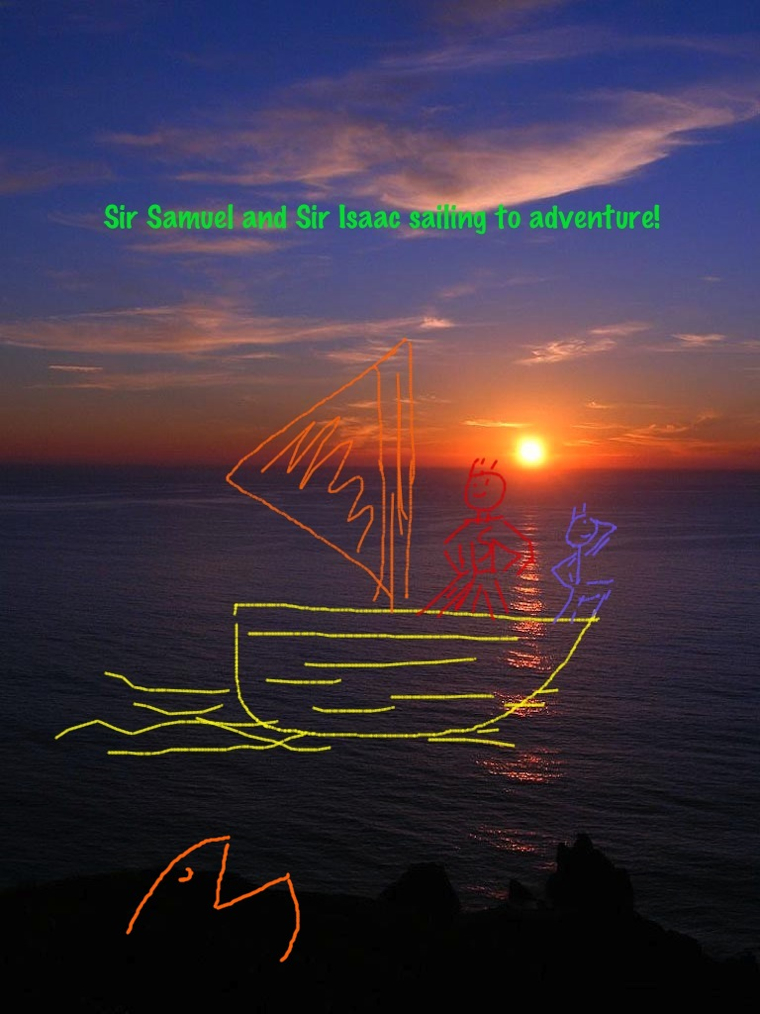