Isolation – Disease of the Modern Man (A Movember Post)

The best thing about blogging on WordPress is the opportunity it brings to interact with people of different sorts – different regions, different backgrounds, different philosophies, different behaviors; it’s rare that I bump into a person who is a whole lot like myself. Different as we are, we […]

Sometimes It Takes A Man

Today I am reposting something I wrote last year at Halloween time. It’s meant to be humorous, of course, but there is a deeper point in it all. Hope you enjoy. I’m going to let the wives in on a secret that most men have already come to […]

Here is the conclusion to this little heartburn of a tale. Thanks for everyone’s enthusiasm. If you aren’t up to speed, Part 1 is here. BTW – If anybody is curious, the lyrics contained in this story are from Greg Laswell’s “Comes and Goes”. His stuff is amazing! […]

I’ve been reluctant to post this one in partial form, but it’s reached the maximum length I like to tolerate in a blog post. Hopefully it compels enough to draw some to part 2 Photo by mysoulmission.org Like a sliver in the chest. If he was asked to […]

Hail To The Janitor (A Salute To The Unnoticed)

I saw him the other day in that same food court in the same mall. Except the food court wasn’t the same because it was on the second floor that didn’t used to be there, and all the restaurants were different, except Sbarro; I think it was always […] 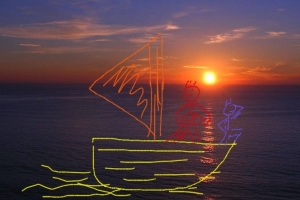 In honor of Father’s Day, I am submitting something very different. The following is the intro to a story that came to me the other night in a dream. The lead characters are literally based on the personalities of my two beloved children. I dedicate this tale to […]

To Sate The Insatiable

I’ve been fighting for time to write this blog for about a week now, ever since an unofficial challenge was proposed by my friend Rabid Mongoose. He and I were in a discussion on the concept of human desire and the ways that it more often than not […]

Night On The Mekong

I was in a conversation with someone recently about mosquitoes, and it reminded me of a night I spent in Asia many years ago. The more I reflected on that night, the more I realized that some pivotal things occurred while I was trying to avoid those little […]