I learned yesterday it is possible to domesticate and train zebras. In fact, they can be made docile enough to trust them in close proximity to young children. Zebras are stunning animals to see up close. They are almost otherworldly, the way their black and white stripes display such a distinctive, brilliant pattern. When you see a zebra carrying a kid on its back, you’d swear for a second that you are in another world – a Narnianesque world where man and wild animal share company just as closely as humans to other humans. 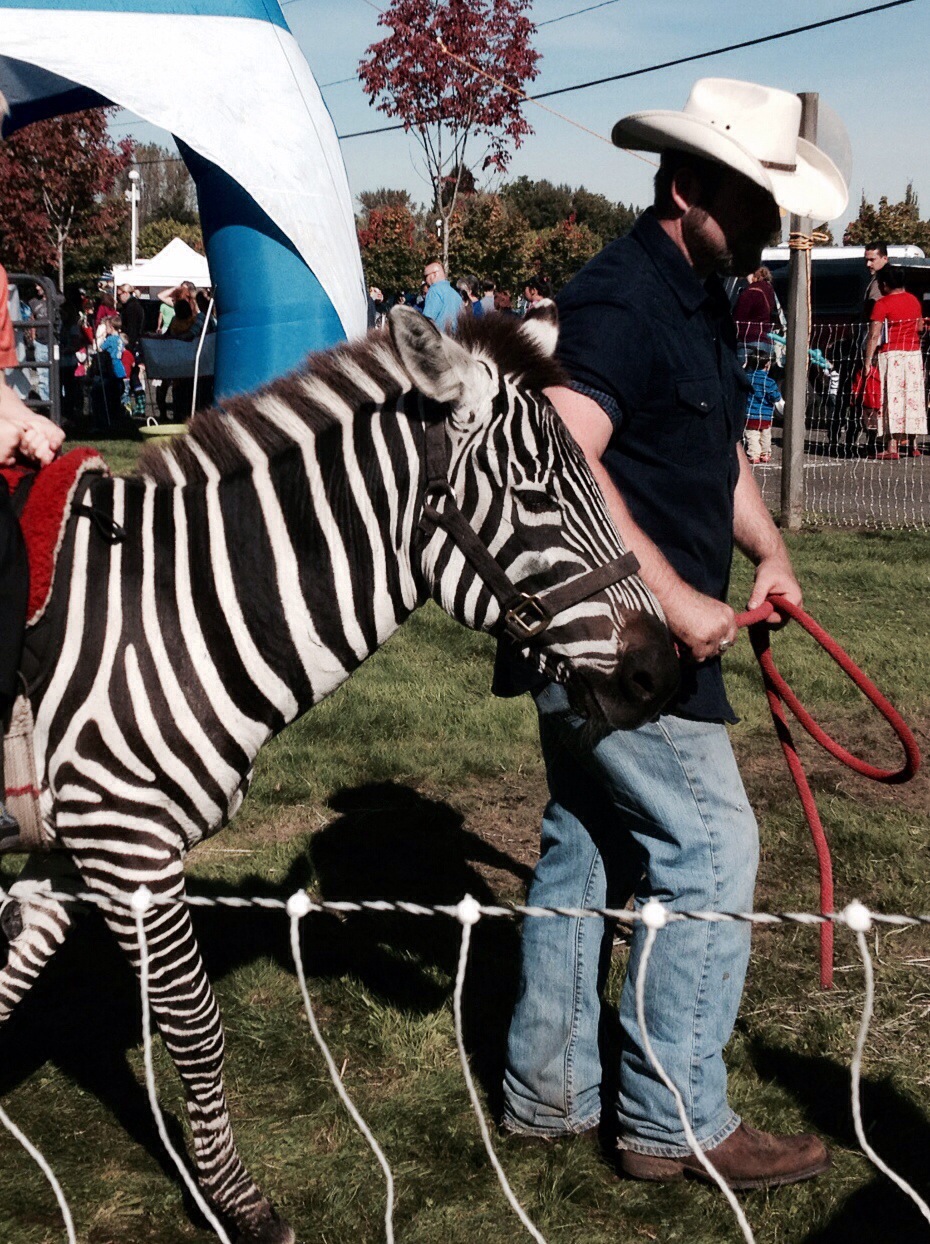 Zebra rides don’t come cheap; in our case, it came at the cost of ten bucks per kid for three quick laps and a photo opp. That’s quite a high price tag, especially at a small city festival where nearly every attraction is offered free of charge. But how often does a kid get a chance to ride a zebra? Five minutes after approaching the zebra pen, we were twenty bucks lighter in the wallet, and I was sideswiped by a demon of disconsolation. Not for the loss of twenty dollars. A sunny, carefree day was now clouded in sadness, and I longed to find a silent place where alone I could weep tears over the fate of that poor, displaced zebra – beautifully wild, yet tragically tamed.

It was in the zebra’s eyes – the angst, laced with tragic resignation. We’ve all seen it when we go to the zoo. Some animals don’t seem to mind the captivity, while others say with their eyes, “Does anybody out there have a twenty pound helping of rat poison I could swallow? For I would prefer death to this mirage.” That was the zebra. It had the look of an animal that somehow knew it was designed for something different – call it something more; I don’t know, but I believe the zebra was remembering something in a mystical way that goes beyond direct experience, drawing instead from blood and bone and sinew. That knowledge, of the memory and the inability to reunite with its preordained place in the world, made the zebra a depressed animal indeed.

“Are they born domesticated, or are they rescued in the wild from endangerment?” I asked one of the handlers.

“No,” he said, “they are all born in captivity. But we have to work with them constantly, because they’ll revert back. If they’re left unbridled for even a week, they start to buck and fight as soon as you put a rider on them.”

Then it hit me – why the zebra made me sad. The zebra is just like us. I heard someone say once that the natural state of a human is to live free from the curses of the flesh and the servitude to debauchery. Our default nature, in other words, is holiness. It is freedom. I’ve always found this impossible to believe, both because I know myself and my own failures, and I see the hopelessness of all mankind to make anything truly good of ourselves. But what if we are like the zebra? What if, given enough time away from the bridle, we could remember again to live wild and free?

Tonight, I pray for that zebra. I pray it is given just the respite it needs from the suffocating domestication that’s been forced upon it, and with a swift kick to trainer’s groin, may it flee with the speed of its wild brothers and live as it knows it was always meant to. I pray this also for myself and every one of us.